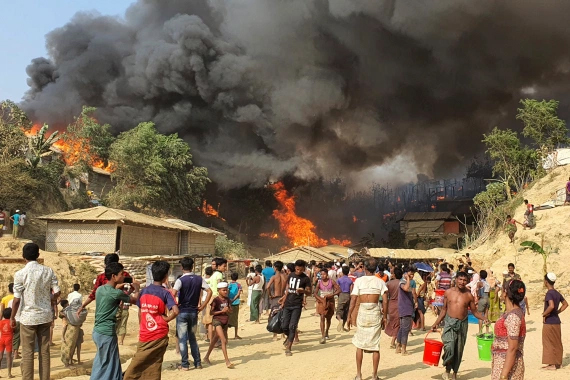 Blaze at Balukhali camp in Cox’s Bazar destroys hundreds of tents, as well as a number of health centres and other facilities.

A massive fire has swept through a Rohingya refugee camp in southern Bangladesh, gutting hundreds of tents and a number of health centres and other facilities, according to officials and witnesses.

The blaze at Balukhali camp in Cox’s Bazar district erupted in the late afternoon on Monday and spread quickly through at least four blocks, according to Mohammad Shamsud Douza, additional commissioner of the government’s Refugee, Relief and Repatriation Commission (RRRC).

No casualties were immediately reported, but deaths and injuries were feared.

“It has been a challenging situation because many of these huts are in a hilly terrain where fire trucks can’t have access,” said Al Jazeera’s Tanvir Chowdhury, reporting from Bangladesh’s capital, Dhaka. “There is no kind of water system within the camp area to douse the fire.”

Sources at the camp told Al Jazeera that the fire was brought under control more than four hours after it erupted, Chowdhury said.

Louise Donovan, spokesperson of the United Nations’ refugee agency (UNHCR), said firefighters and rescue and response teams were at the scene trying to control the blaze and prevent it from spreading further.

“All partners are providing support together with the RRRC and emergency services,” she said, adding that humanitarian partners have mobilised hundreds of volunteers from nearby camps to support the efforts, as well as fire safety vehicles and equipment.

“So far, the fire has affected shelters, health centres, distribution points and other facilities. Volunteers are supporting those affected,” she added.

Witnesses at the camp said the fire started at about 3:30pm (10:30 GMT). Some said they believed it started from a liquefied petroleum gas cylinder explosion, though this has not yet been confirmed.
“The locals first tried to douse the fire on their own. But soon it started to spread rapidly,” Lalu Majhi, a Rohingya leader from Balukhali camp, told Al Jazeera.

“We immediately tried to evacuate the N8 block of the camp where the fire had started.”